In a rare moment of reflection and self-evaluation, I came face-to-face with a startling realization about my own biases and prejudices. 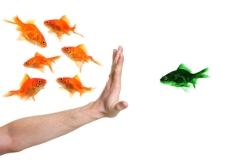 I will believe as Gospel truth anything told to me by someone who has a proper British accent or a deep baritone voice.  The late Sir Richard Burton, James Earl Jones, Patrick Stewart or Dennis Haysbert could sell me swamp land, stock in the Brooklyn Bridge, a body organ or a radioactive device.  They could tell me that they know where Jimmy Hoffa is buried, reveal their encounters with alien life forms or how to make gold from base metals and I would believe them.  They could convince me that I was a victim of botched trans-vaginal mesh surgery or that I lived a previous life in the court of Emperor Franz Joseph of Austria-Hungary.  I could listen to any of these voices as they recite the Newark, New Jersey yellow pages and be mesmerized.

I consider Abraham Lincoln as the greatest prose poet of the nineteenth century.  He is reported, however, to have had a high-pitched, squeaky voice.  It is better that I never heard him speaking his famous words because I would not accept them.

Imagine that you are driving along an interstate highway in the Deep South in the United States and you are involved in a terrible traffic accident.  You are rushed to the emergency center of a nearby regional hospital with life threatening injuries.  Which of these two doctors would you prefer to operate on you?

Doctor Number 1:  (in a clipped, upper class British accent) “I am your surgeon, Dr. Hugh Lockhart-Mummery.  Trust me when I say that I and my superbly capable staff shall get you through this complicated procedure with as little difficulty as possible.  I must tell you that, although I trained at Harvard, Oxford, the Mayo Clinic and the American Hospital of Paris, this is my very first attempt to perform this complicated operation.  Your family may rest assured, though, that you are in competent hands.”

Doctor Number 2: (in an accent like Gomer Pyle): “Well gol-lee, we sure got us a good one here.  Haven’t seen a break like this since baby brother fell outta the ol’ swamp oak.  I’m Dr. Joe-Bob and me and my crew will get you fixed up quicker’n your mama can unbutton her overalls.  Done a couple thousand of these and ain’t had to call the morgue yet.”

Now logic would dictate that Dr. Joe-Bob, with a thousand plus operations under his belt, knows what he is doing and Dr. Lockhart-Mummery-Whatever doesn’t know squat.  But are you going to tell me that you would not be reassured by that soothing voice of confidence that only comes with a proper British accent?  And that you would be less than comforted by hearing the voice of a surgeon who sounds like one of the supporting characters from the Dukes of Hazzard?

Yes, we all carry our biases and prejudices with us.

Now, if you’ll excuse me, someone who sounds just like James Earl Jones is telling me I only have five minutes left to make a once-in-a-lifetime investment in property on the moon.

20 thoughts on “Biases and Prejudices”