In a year of trips and travel, my wife and I added one more – a week in Acadia National Park and Bar Harbor or, more phonetically, Bah Ha Bah, where we pahked ah cah in the yahd and ate labstah.

I got a shock when we arrived at what I thought was our rental house, mistaking the abandoned house next door for our rental.  The actual rental property was very pleasant.

Along with plenty of seafood, we got to see the sights of Acadia – lighthouses, seashores, beaches and the Carriage Road Bridges.  Well, I got to see one bridge and will save the others for another trip. 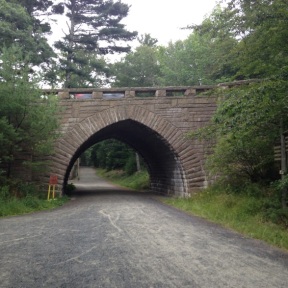 Added to our previous trip to the Grand Tetons, Yellowstone and Glacier, I made it to four national parks this year to add to a total of 16 out of 62 US National Parks.  I’ve gotten to some heavily traveled ones – Yellowstone, Yosemite and Grand Canyon – and a few uncommon ones – Dry Tortugas – but I doubt I’ll make it to all 62.  Some of them require quite a hike:  American Samoa, US Virgin Islands and Voyageurs in the middle of Lake Superior as well as two above the Arctic Circle in Alaska.

We met a fellow at Acadia who was sprinting his way through most US National Parks, sometimes visiting two a day!  The US National Parks are meant to be enjoyed at a leisurely pace, not raced through like a marathon.

What is the most remote or least traveled park you have been to?

Our National Parks trip ended at Glacier National Park where we stayed at the Lake McDonald Lodge.  Glacier is not named for its (diminishing) glaciers but for the process of glaciation that formed the park’s terrain. 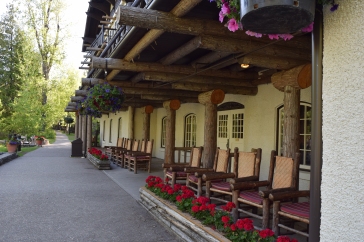 There are two routes that run north/south on the eastern and western side of the park.  Lake McDonald Lodge is reached by the western route.  Going-to-the-Sun run cuts directly across the park from west to east through Logan Pass but, due to the high elevation and heavy snows, it is often closed until late June.

Since we took our trip early, the road was only open to Avalanche Creek.  We did get to hike the Avalanche Creek trail up to Avalanche Lake and were rewarded with breathtaking views as well as siting both a black bear and grizzly bear!

Butte, MT is not on most people’s list of places to visit when going to National Parks.  In fact, it is not of most people’s list of places to visit period.  It is, however, halfway between Yellowstone and Glacier National Parks.  We decided to break up an over eight hour drive by spending the night at the Copper King Mansion, now a bed and breakfast in Butte, MT.

According to Wikipedia, the Copper King Mansion is a 34-room residence of Romanesque Revival Victorian Architecture that was built from 1884 to 1888 as the residence of William Andrews Clark, one of Montana’s three famous Copper Kings.  We stayed in the Master Suite.  The owners, Erin and Pat, were very gracious and knowledgeable about the mansion and its restoration and upkeep.  After a delicious breakfast and a full tour of the mansion, we continued on to Glacier National Park.

Copper mining in the nineteenth and early twentieth centuries was done by pit mining with headframes, the structural frame above the underground mine shaft.  Open pit mining – the Berkeley Pit – did not occur until the mid-twentieth century and was closed in 1982. 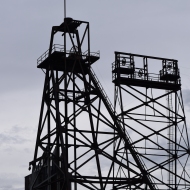 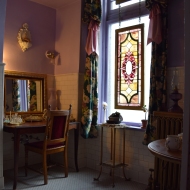 A favorite saying goes “If you don’t like the weather, wait ten minutes.”  I believe that Yellowstone has all other locations beat.  After the Grand Tetons, we made our way from the Jackson Lake Lodge to Old Faithful Inn.  The first picture shows the snowy, overcast weather we encountered and the traffic jam caused by a motorist’s car stuck in the snow.  A helpful park ranger got the motorist unstuck.  After arriving at Old Faithful, we decided to drive up to Mammoth Hot Springs and the second picture shows the snowless drive.  Same day, different weather patterns. 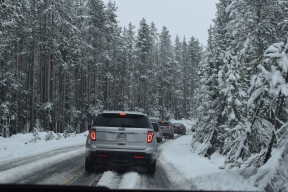 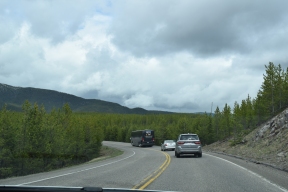 Yellowstone is too fascinating to cover in just a few pictures.  Over 3 million visitors go each year and most of them, I suspect, make the trek to the Old Faithful Inn and Old Faithful geyser.

Both are worth the stop but there are more geysers than just Old Faithful.  In fact, within a single square mile around Old Faithful are half the geysers on the planet.  There are also fumeroles, hotsprings and mudpots in the park.  A few days are not enough time to see all the wonders of Yellowstone but we did manage to see Old Faithful, Mammoth Hot Springs, West Thumb, Lamar Valley, Upper and Lower Falls and Grand Prismatic Spring. 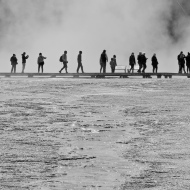 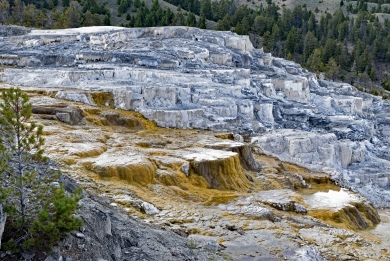 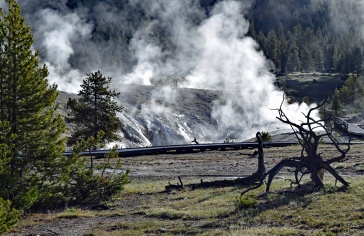 [Next up is a brief stop at the Copper King Mansion on the way to Glacier National Park.]

I know, I know.  I have been absent and have failed to fulfill my complement of bitching and grousing.

First up, the Grand Tetons.

The first four pictures are the classic one (though a bit cloudy) of the Snake River in the foreground and the Tetons in the background.  The Tetons are unusual in that, unlike most mountain ranges (the Rockies, the Appalachians, the Cascades and Sierra Nevada’s), they rise directly from a flat valley without any foothills.  It’s all due to tectonic activity and the fact that one tectonic plate is moving directly under another and, as one plate rises, erosion levels the valley floor.  At times, it is as though there is a flat valley floor and the Tetons are huge fake drapery to convince you that there are mountains. During our visit, we took the boat ride across Jenny Lake and the next picture shows the approach to the landing dock.  A hike with a 600 foot in elevation change took us to hidden falls (next picture).

A Mormon community attempted to establish a farming community in the latter part of the nineteenth century and this barn is often captured in photographs of the now abandoned buildings of that community.

Next is a picture taken from our bedroom balcony at the Jackson Lake Lodge and the last is one on our departure to Yellowstone as the weather cleared.

[Next up is Yellowstone.]