A new exhibit hopes to remove the taboo of “potty talk” — or flush it away — to raise awareness about pressing sewage disposal issues worldwide, as the UN estimates 2.5 billion people globally do not have access to proper sanitation. 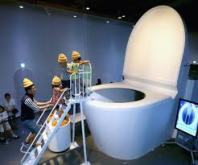 People who visit The National Museum of Emerging Science and Innovation in Tokyo don hats shaped like poop and go down a slide inside a giant toilet that is supposed to simulate the journey of human excrement. Models of different toilets around the globe are also on display.

As one visitor summed the show’s draw, “It’s not every day that you can become feces.”

There is something both amusing and slightly disturbing about this exhibit.  Wearing a poop hat gives new meaning to getting shit-faced.

I can see The New Yorker, famous for its cartoon captions, having a contest on an illustrated version of the toilet slide.

A husband and wife talking to each other as the kids slide down the toilet slide:
“Gee, I had no idea that it was so easy to get rid of the kids.”

A show promoter talking to parents as the kids slide:
“After the slide, each child gets our world-famous, life-like poopsicle as a treat.”

Well, that’s enough excrement for one day.   Anybody ready for lunch?