Puns for Educated Minds is one of my most viewed posts.  While I search for more groan-worthy puns, you can occupy waste your time with these educated groan-worthy jokes, courtesy of tickld.  I’m sure that these jokes are the talk of any MENSA meeting.

1.  It’s hard to explain puns to kleptomaniacs because they always take things literally.

2.  What do you get when you cross a joke with a rhetorical question?

3.  Three logicians walk into a bar.  The bartender asks “Do you all want a drink?”

5.  A Buddhist monk approaches a hotdog stand and says “Make me one with everything.”

6.  A Roman walks into a bar and asks for a martinus.

“You mean a martini?” the bartender asks.

The Roman replies, “If I wanted a double, I would have asked for it!”

7.  Another Roman walks into a bar, hold up two fingers and says “Five beers, please.”

8.  A logician’s wife is having a baby.  The doctor immediately hands the newborn to the dad.

His wife asks impatiently “So, is it a boy or a girl?”

9.  Jean-Paul Satre is sitting at a French café, revising his draft of Being and Nothingness.  He says to the waitress, “I’d like a cup of coffee, please, with no cream.”  The waitress replies, “I’m sorry, Monsieur, but we’re out of cream.  How about with no milk?”

11.  How can you tell the difference between a chemist and a plumber?  Ask them to pronounce unionized.

12.  Why do engineers confuse Halloween and Christmas?

13.  Werner Heisenberg, Kurt Godel, and Noam Chomsky walk into a bar.  Heisenberg turns to the other two and says, “Clearly this is a joke but how can we figure out if it’s funny or not?”  Godel replies, “We can’t know because we’re inside the joke.”  Chomsky says, “Of course, it’s funny.  You’re just telling it wrong.”

14.  Pavlov is sitting at a pub enjoying a pint.  His phone rings and he jumps up shouting “Oh shit, I forgot to feed the dog!”

15.  Helium walks into a bar and orders a beer.  The bartender says “Sorry, we don’t serve noble gases here.” He doesn’t react.

16.  Einstein, Newton and Pascal are playing hide and go seek.  It’s Einstein’s turn to count so he covers his eyes and starts counting to ten.  Pascal runs off and hides.  Newton draws a one meter by one meter square on the ground in front of Einstein then stands in the middle of it.  Einstein reaches ten and uncovers his eyes.  He sees Newton immediately and says “Newton!  I found you!  You’re it!”

Newton smiles and says “You didn’t find me, you found a Newton over a square meter.  You found Pascal!”

17.  A mathematician and an engineer agreed to take part in an experiment.  They were both placed in a room and at the other end was a beautiful naked woman on a bed.  The experimenter said every 30 seconds they would be allowed to travel half the distance between themselves and the woman.  The mathematician said “this is pointless” and stormed off.  The engineer agreed to go ahead with the experiment anyway.  The mathematician exclaimed on his way out “Don’t you see, you’ll never reach her?”  To which the engineer replied, “So what?  Pretty soon I’ll be close enough for all practical purposes.”

18.  A Higgs Boson walks into a church and the priest says “We don’t allow Higgs Bosons in here.”  The Higgs Boson replies, “But without me, how could you have mass?

19.  The programmer’s wife tells him, “Run to the store and pick up a loaf of bread.  If they have eggs, get a dozen.

The programmer comes home with 12 loaves of bread.

I’m not sure about the ‘educated’ part.  I just couldn’t resist listing a bunch of really bad puns. 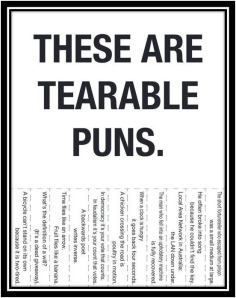 The fattest knight at King Arthur’s round table was Sir Cumference. He acquired his size from too much pi.

I thought I saw an eye doctor on an Alaskan island, but it turned out to be an optical Aleutian.

She was only a whiskey maker, but he loved her still.

A rubber band pistol was confiscated from algebra class, because it was a weapon of math disruption.

No matter how much you push the envelope, it’ll still be stationary.

A dog gave birth to puppies near the road and was cited for littering.

A grenade thrown into a kitchen in France would result in Linoleum Blownapart.

Two silk worms had a race. They ended up in a tie.

A hole has been found in the nudist camp wall. The police are looking into it.

Atheism is a non-prophet organization.

Two hats were hanging on a hat rack in the hallway. One hat said to the other: ‘You stay here; I’ll go on a head.’

I wondered why the baseball kept getting bigger. Then it hit me.

A sign on the lawn at a drug rehab center said: ‘Keep off the Grass.’

The midget fortune-teller who escaped from prison was a small medium at large.

The soldier who survived mustard gas and pepper spray is now a seasoned veteran.

In a democracy it’s your vote that counts. In feudalism it’s your count that votes.

When cannibals ate a missionary, they got a taste of religion.

If you jumped off the bridge in Paris, you’d be in Seine.

A vulture boards an airplane, carrying two dead raccoons. The stewardess looks at him and says, ‘I’m sorry, sir, only one carrion allowed per passenger.’

Two fish swim into a concrete wall. One turns to the other and says ‘Dam!’

Two Eskimos sitting in a kayak were chilly, so they lit a fire in the craft. Unsurprisingly it sank, proving once again that you can’t have your kayak and heat it too.

Two hydrogen atoms meet. One says, ‘I’ve lost my electron.’ The other says ‘Are you sure?’ The first replies, ‘Yes, I’m positive.’

Did you hear about the Buddhist who refused Novocaine during a root canal? His goal: transcend dental medication.

There was the person who sent ten puns to friends, with the hope that at least one of the puns would make them laugh. No pun in ten did.