Taking our Health for Granted

Carrie Rubin recently wrote a post – It’s Easy to Take Our Health for Granted until It’s Taken from Us – describing her mother’s unfortunate ongoing health issues.  Unlike me, Carrie’s mom has retained a sense of humor through all this adversity.  In comparison, I would bitch, moan and complain about every insignificant problem – ingrown toenail, flea bite, that zit that always arises at the end of my nose – in the vain hope that it would ward off more serious problems.

So why do we systematically take our health for granted?

Avoidance part 1 – We avoid the obvious, men in particular. The fact that we can no longer stand up straight or bend our knees or that we donate blood whenever going to the bathroom is of no significance.  If a man loses his arm, he will still not want to go to the emergency room saying “It’s okay; it will grow back.”

Avoidance parts 2 – Studies have shown that daily exercise increases longevity by three years. Of course, most of that extra longevity was spent exercising.  Take out the extra time exercising and you only increase your longevity by three days.  In the words of www.despair.com , “Hard work often pays off after time, but laziness always pays off now.”

Pleasure seeking part 1 – I was touring Yosemite National Park a number of years ago and watched what I thought were bugs crawling up the side of El Capitan, the granite monolith extending about 3000 feet from base to summit. With strong binoculars, I realized that there were several teams of climbers scaling a shear face of rock.  It was far easier for me to watch than to participate.  Thrill seeking activities come with the risk of injury, sometimes fatal injury.  On the other hand, if you are going to die of something, make it something you like. ***

Pleasure seeking part 2 – Why do we consume in excess items that are injurious to us like cigarettes, alcohol or drugs? Because, we argue, they make us feel good.  If one of these is good, then two, three or forty-nine of these must be better.  Besides, they create jobs for the Bureau of Alcohol, Firearms, Tobacco and Explosives and the Drug Enforcement Administration as well as stimulate the economy.  If we collectively stopped consuming these items that are bad for us, we would send the financial system in a tailspin.

So, put up your feet, sit back on your fat butt, take a swig of rotgut, a drag on your cigarette, and watch endless reruns on the TV knowing that you are doing your part for the health of the economy.  Sacrificing your own health was never easier. 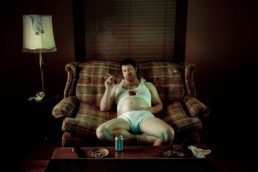 ***Registered trademark, watermark, patent and copyright of Curmudgeon-at-Large. If you use this phrase without my permission and without sending me big bucks, a million fleas will infect your armpits.  I point out that it is not easy to train a million fleas to attack and infect armpits.