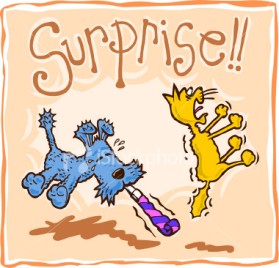 Dr. Language Guy here. After a long hiatus, I was brought back to life by a recent Reader’s Digest article about surprising words recently added to the dictionary.  While I cannot improve on them, I can give my own alternatives.

Often found on social media, the humblebrag is a boast disguised as self-deprecation: ‘I’m so nervous about picking up my Nobel Peace Prize, I’ll probably trip on my way up to the podium!’ Most legitimately used in job interviews to answer the dreaded trick question, ‘What is your worst quality?’ There is no other answer but a humblebrag: ‘I’m such a perfectionist, and I work too hard. My boss has to make me go home at night to take a break.’

[Dr. L G: I am familiar with humblebrag.  I am often asking people to look for my lost Congressional Medal of Honor at dinner parties.]

A snollygoster may sound like a Dr. Seuss character with a topknot, but it’s actually a shrewd, unprincipled politician who is only out for himself. First popularized by President Truman after World War II and fallen into disuse for decades, this colorful insult has been almost single-handedly revived by Fox News host Bill O’Reilly.

[Dr. L G: I am more likely to think of a snollygoster as snot that gets hidden under the coffee table.]

Fast fashion doesn’t necessarily involve roller blades, peekaboo necklines, or racing goggles. Instead, it refers to an elaborate system of producing cheap, trendy garments in sweatshops that are designed to fall apart quickly: the perfect excuse to buy next season’s fad. Like fast food, it’s cheap, temporarily satisfying, but not especially good for you.

Have you been wondering what to call an old star that’s imploded under the pressure of its own gravity to form a white dwarf, neutron star, or black hole? Try collapsar, which may sound like a Marvel super villain or an old Arnold Schwarzenegger movie, but really just means ‘collapsed star.’

Everyone knows about hardcore and software, but what about mumblecore? Lena Dunham’s TV show Girls is a prime example of this genre, which focuses on the private lives of earnest young slackers who talk a lot but don’t understand themselves and, frankly, sometimes don’t speak clearly enough for the audience to understand them either.

[Dr. L G: It is what you say under your breath when your spouse announces that a dear friend, who you cannot stand, is coming to visit for three weeks.]

If you’re one of the many fans who pines for discontinued software, especially games from PacMan to Carmageddon 2: Carpocalypse Now, you probably know all about abandonware. For the rest of us, it’s a revelation to discover that third-party suppliers are keeping thousands of orphaned programs alive online—enough to justify a new word in the dictionary!

Sometimes it takes a new word a while to catch on. Yowza, an exclamation of surprise or amazement, was first introduced in 1933. It never died out, probably because it’s just so much fun to say, and this year it finally made the cut.

Woo woo may remind you of courtship, cheerleaders, or baby talk, but it actually refers to any mystical, paranormal, and generally unscientific claim, from alien abduction to the telekinetic bending of spoons. But as Julia Moskin, a New York Times reporter, puts it, ‘One man’s woo-woo, of course, is another’s deeply held belief system.’

A conlang has nothing to do with three card monte, Ponzi schemes, or the lost wallet scam. It’s an invented language with a real vocabulary and consistent grammatical rules. And though conlangs arise from elaborate fictional worlds like Klingon from Star Trek, Elvish from Lord of the Rings, or most recently, Dothraki from Game of Thrones, these languages have taken on a life of their own, with thousands of fantasy fans around the world using them in real life.

Anyone older than 110 is supercentanarian, and we’ll probably be seeing that word a lot more often as human life spans continue to grow. Is that a good thing or a bad thing? Probably depends on the supercentanarian!